Geeking out about Gear: The Spider Pro dual camera holster system review with close up photos! 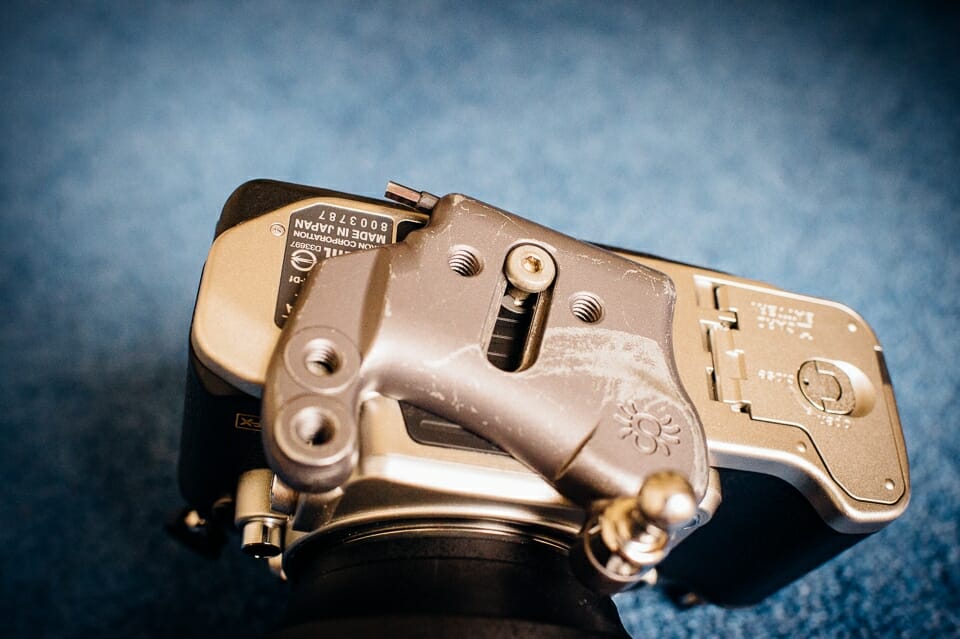 Today I want to review this amazing piece of equipment I use that is an absolute life saver and I don’t think I could shoot without. It has no buttons and no glass… it’s my SPIDER PRO DUAL CAMERA SYSTEM

! This is one of those accessories where I think the company have not done themselves any favour by advertising it with a dude in chinos and (I’m inferring) loafers, as it looks like something ridiculous only a middle aged geek would buy (wait, that’s kind of me in 10 years…). Here is their commercial photo taken from their website: 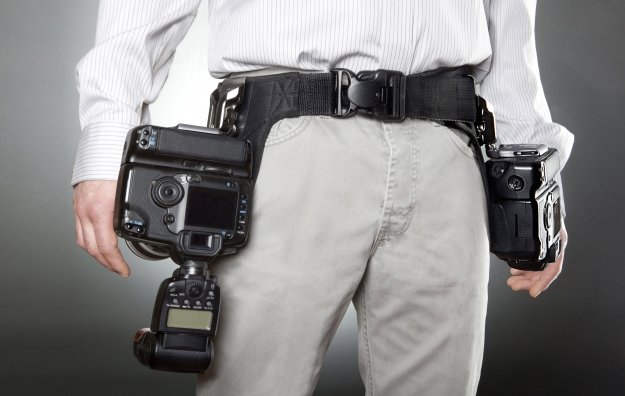 And here’s me gandering about with it in the real world. 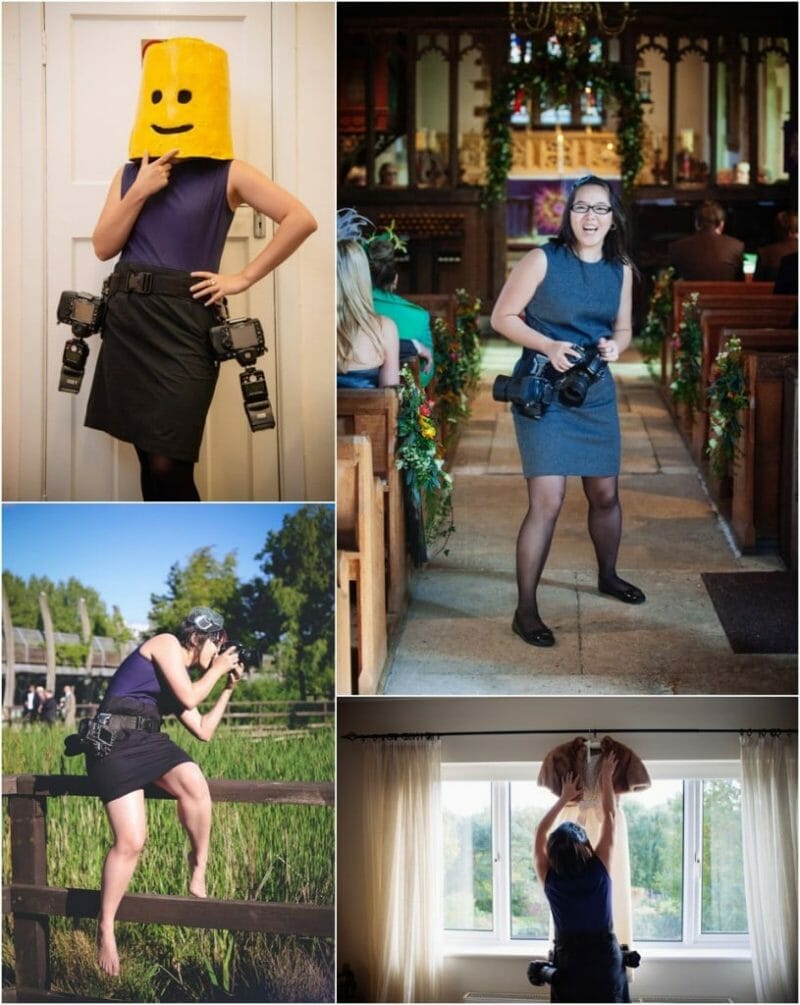 The spider (as I’ll now refer to it as), is an alternative to using camera straps, and comes in a single or dual wield option. In my personal opinion, if you’re shooting with one camera, you probably won’t need something like this as one camera isn’t too heavy and you don’t have an issue with holding one camera awkwardly dangling around whilst attempting to shoot with the other. These sorts of dual shooter problems are what the spider is great at addressing. Now firstly, I’d like to go over why you’d ever even bother blowing a cool £190~ on this piece of kit; Why would you not just use the straps Nikon/God intended for the camera? Well for me, as a petite lady I always had multiple issues with using the own brand straps:

1. After a full day of shooting, I’d always have a lot of shoulder and back pain. I’m only in my late twenties, I don’t want to be using a walking stick before I have kids.

2. Maybe this is just me, I’m the kind of person who puts her headphones down and finds them 2 hours later looking like a plate of spaghetti, but I found my straps getting tangled up because I’d shoot with the right one, then swing it back round and shoot with the left and before I know it I can’t breathe and I’m being strangled by straps.

3. It really restricted my movement, I couldn’t get down on the floor easily, or climb up on places easily, which are things I like to do at weddings. I’d have to be really conscious of the cameras bumping into each other- one time I cracked a screen guard on the corner of the other body just from them clunking together. Thankfully the screen guard is just a £1 plastic thing that I quickly replaced from ebay, so no harm done, but without the guard, a cracked screen would be argh.

So, after a bit of arghiness on the job, I eventually stumbled across the spider holster and decided to give it a try, buying it for around £140 second hand off another photographer. And it changed my photography life.

All the previous problems listed above, are no longer a problem, the most important thing for me if my health, and a lot of long-time photographers have mentioned their regular osteopath appointments etc. so I am determined to not join them. All the weight of the two cameras rests on my hips, which is fine because my hips don’t bat an eyelid about it. My upper body is so much more free to move around, hold other things, climb on things etc. Imagine it’s like having a giant pair of jean pockets that you can throw your camera into, isn’t that so much better than the feeling of carrying a heavy shopping bag over each shoulder? Let’s go over some details and functions of the belt before I get carried away with my personal experience of it.

Details of the spiderpro holster system

It’s basically a black belt, with two padded sections that the camera rests against and two metal holster clips securely attached to the pads. Here’s a photo of my poor well used belt, to gain perspective on the build quality this belt has been used at about 50 weddings. 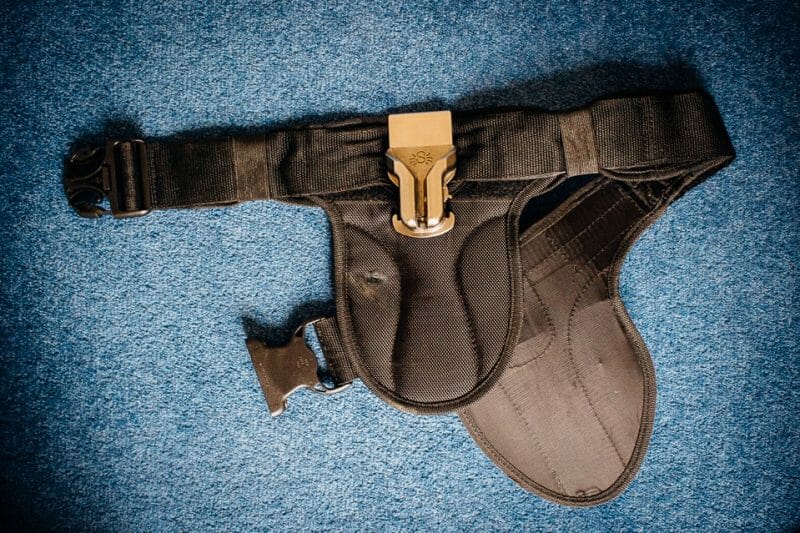 You then get two base plates that screw into the tripod mount of your camera. 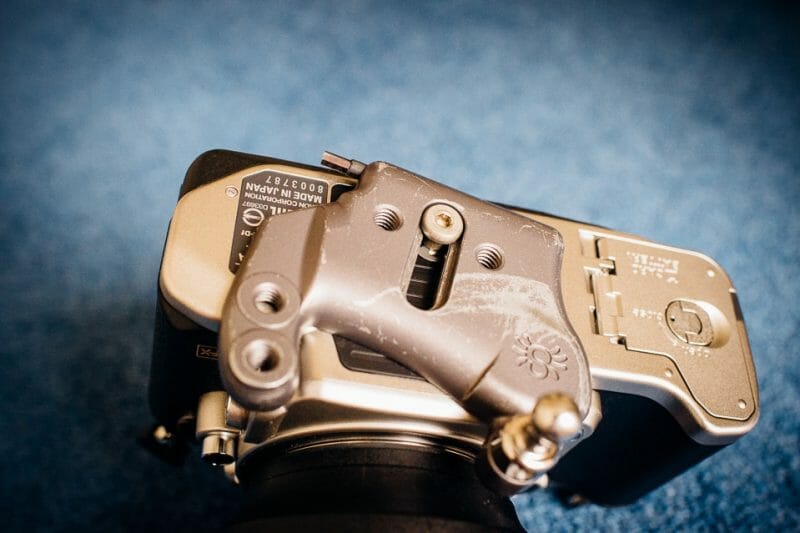 And the base plates connect the the camera to the belt like so: 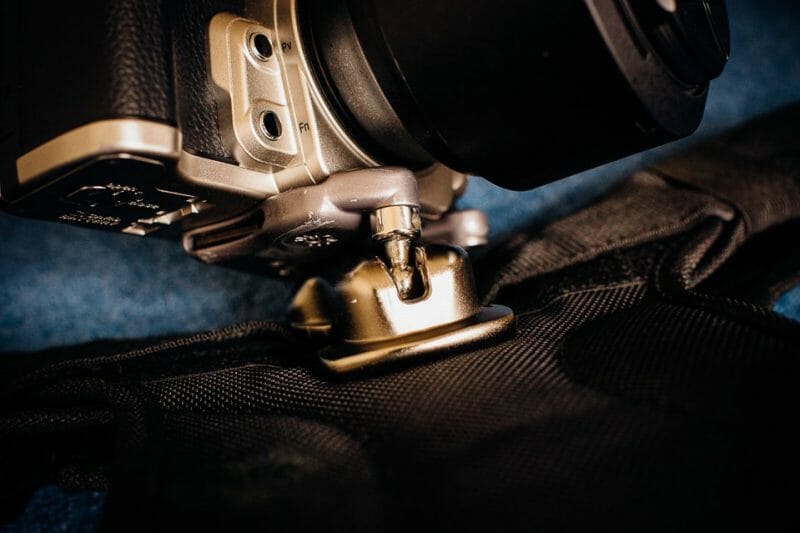 This is how the camera stays securely into the holster. The first photo is unlocked and second photo is with the locking mechanism in place 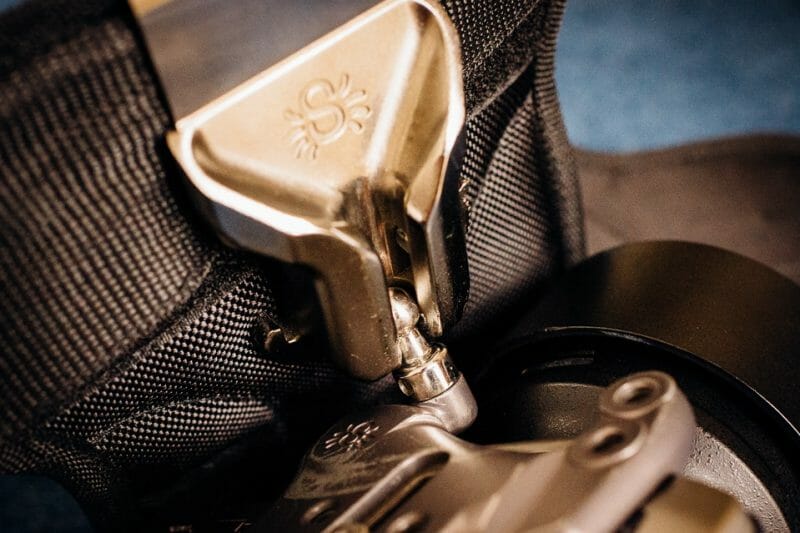 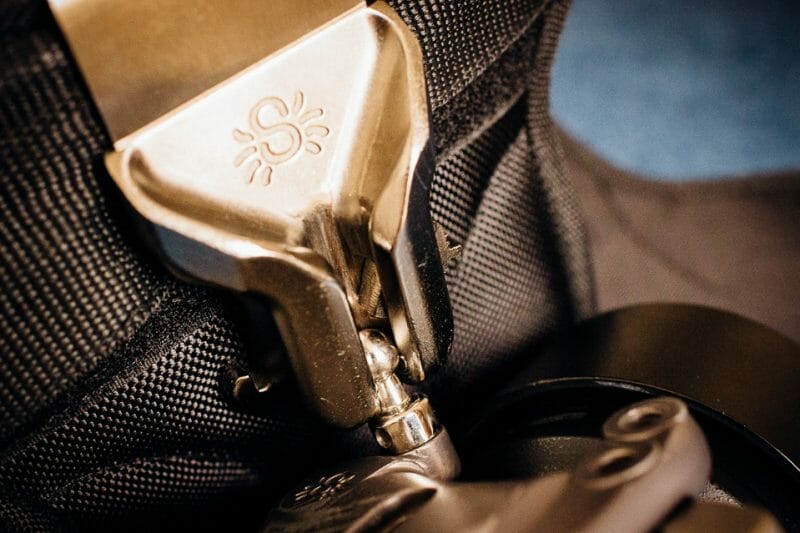 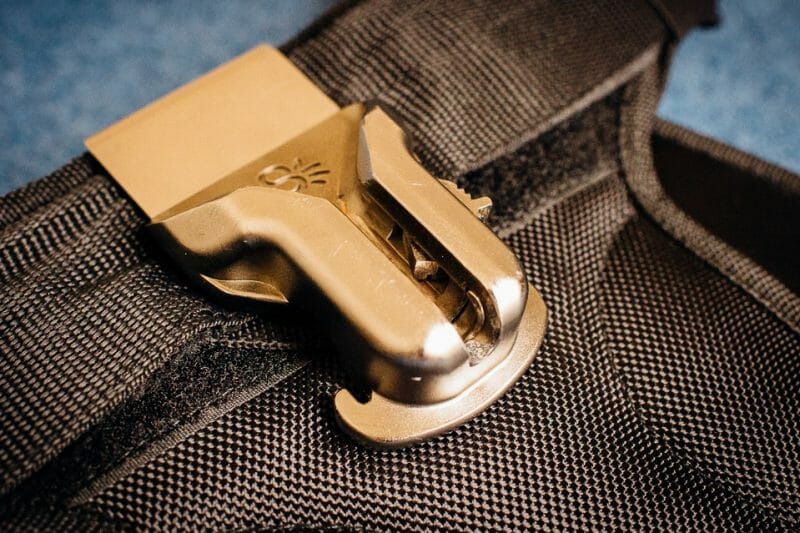 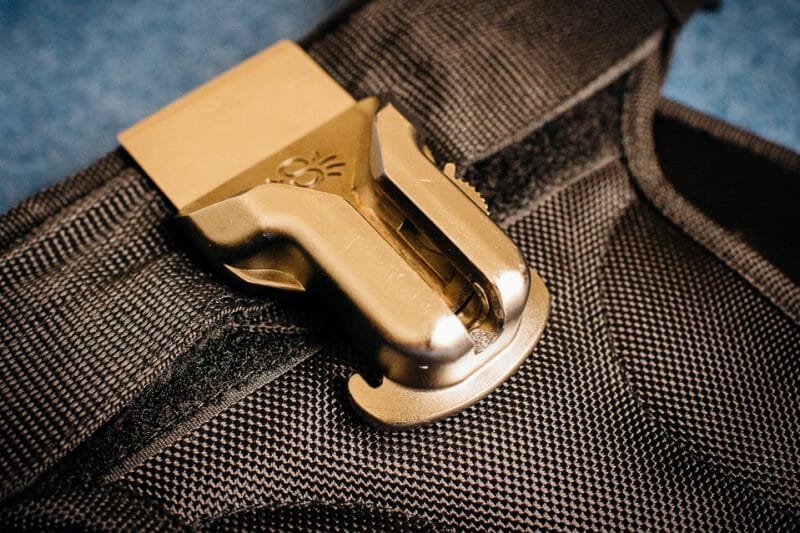 Quite a few of my friends have considered this belt system and when they look at videos and photos lots of questions arise. I have usually found people tend to be converted once they actually try it out, and those who have bought it after trying mine are all still loving it as far as I know. Here were a few of the common concerns I’ve found and my thoughts on them:

1. Is it a problem fitting through doorways?

Yes, with the spiderpro belt you will find that you need to adjust your default perceptions of your own width, when I first wore it I did knock into chairs and door frames a bit, but just like anything new you get used to it after a time and now I just know when to turn sideways slightly

As you can see from the above photos, it’s an all metal mechanism, and even if you hung upside down from a monkey bar- if the locking mechanism is in place, your camera isn’t going anywhere! I have never had any qualms about the trustworthiness of the spiderpro holster. Notably the buckle is double locking, so there’s no chance in hell of accidentally unlocking it

3. Will my pants fall down with the weight of the camera?

As a lady, I find this belt exceptionally comfortable as I have hips. However, for blokes, and I’ve asked a few of my male photographer friends, if you’re a portly kind of shape I imagine it is potentially a bit difficult having the belt feel secure and comfortable. As comfortable as a weighted belt can feel! So in short I’d say it would depend on your own physique.

I seriously recommend this for anyone with back problems who dual shoots at weddings. It has really changed so many of my friends’ lives. Sure it doesn’t look like the most stylish thing ever (I’m waiting for them to come out with a leather version!) but it’s very good at what it does and it is without a doubt the best thing for a wedding photographer’s health! You can grab one directly from the link below!