An unboxing and review of the MagMod speedlight modifier, MagGrid and MagGel with photos 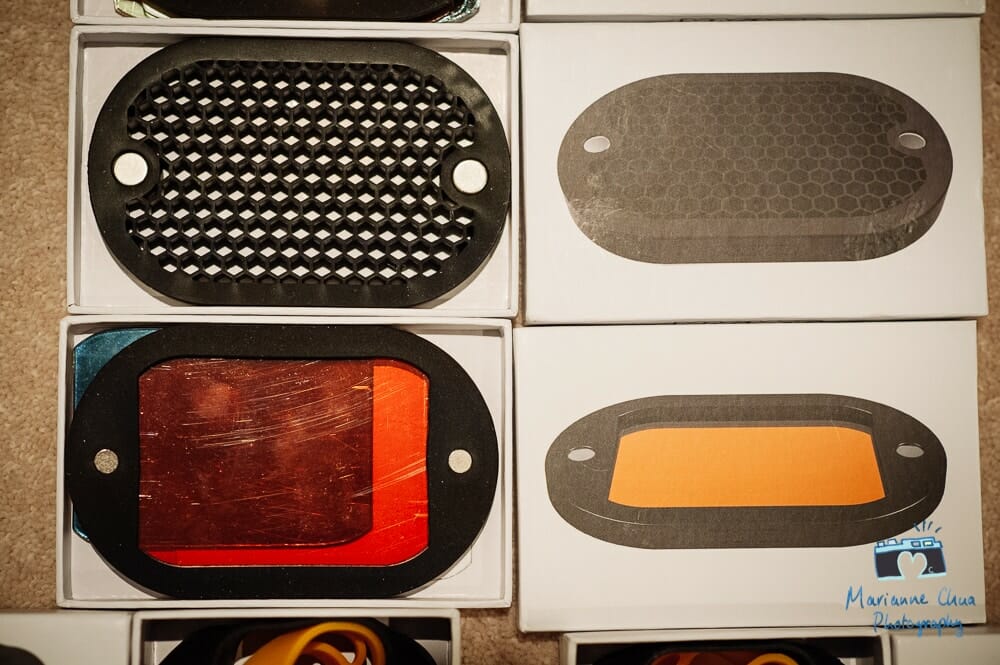 For those that are late to the party, MagMod is a nifty new solution for the ol’ velcro tabs and gel faff or weird phallic snoot options. It boasts instant changing between gels and grids, mega secure attachment (how many gels have you lost at how many weddings?) and seems like a perfect small fit solution. I backed it on Kickstarter, and I’m proud to say one of the first few people in ze world to receive it! I dual shoot, so I bought the double kit with 2 grids and 2 gel holders. I apologise in advance for the photo quality, I’m not a product photographer and it’s 11pm! Let’s cut straight to the unboxing…

I’m not sure what the situation is for other kickstarters to later purchases, but early birds got their magmods packed in a plasticy pouch with a toggle string. This would be handy for finding it in the dark depths of your camera bag (considering that’s possibly the hour you’ll get your flash out). 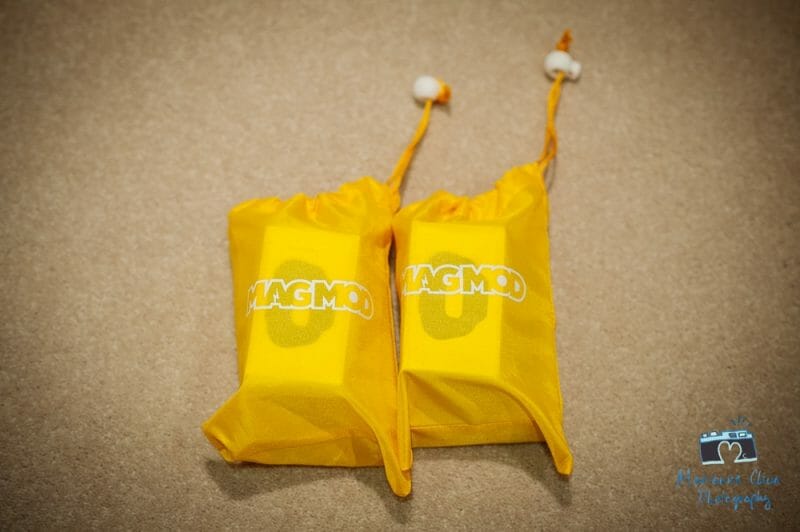 Laying out all the boxes, the packaging is pretty cool, quite sleek, one box per product, namely the mag grip (that goes onto your flash), the mag grid and mag gel 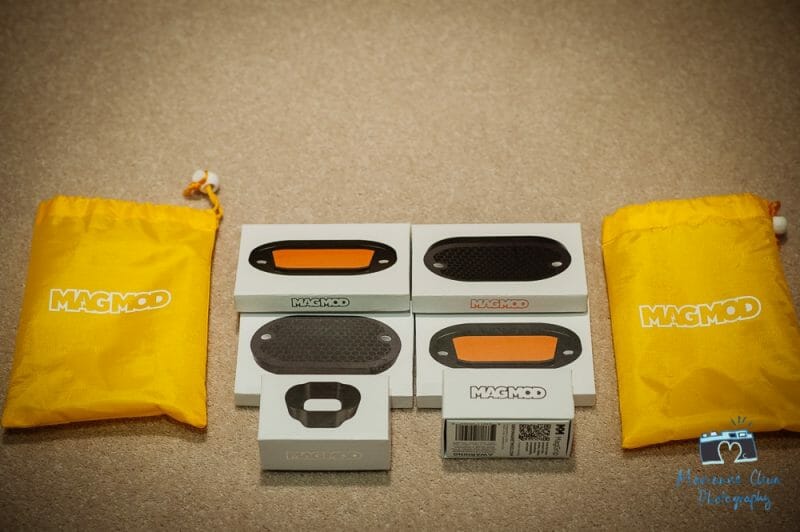 Here’s what everything looks like with the lids off. The extra gels were under the mag gel. Notably there’s no instructions, you have to scan a QR code with your phone on the backs of the boxes for the shop and more product info etc. 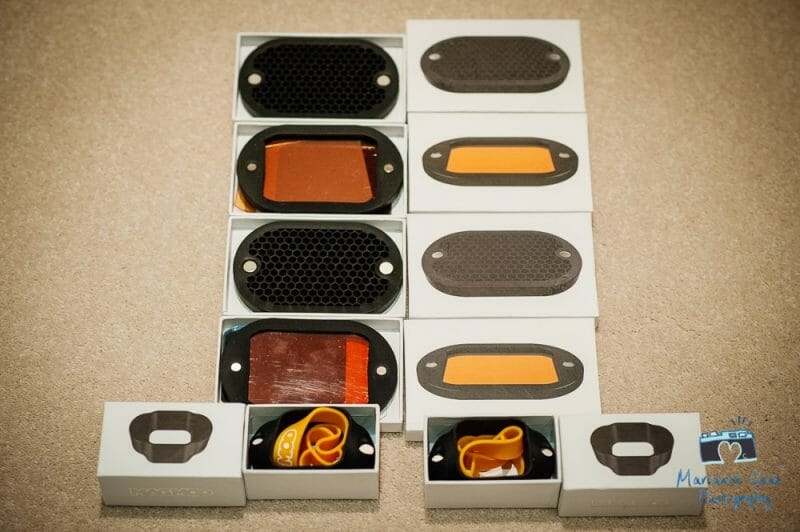 It took me a while to work out what the yellow thing was, it’s a band to hold your radio receivers on the tops of your flash. I thought they were some new Livestrong trend at first. 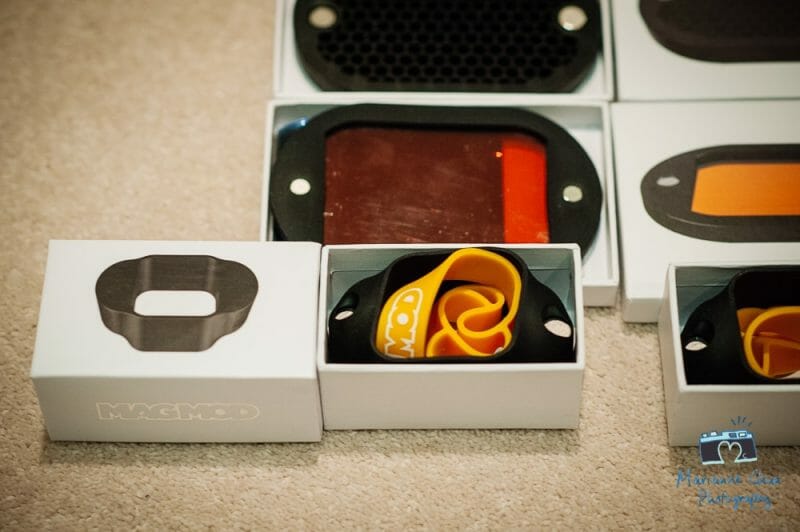 One thing I noticed was that the gels are hard plastic, rather than wibbly things from Hobby craft, the downsides of this would be that it takes up more space in the bag, I kind of squash everything into the bag so I’m a tad worried I’ll snap a gel. Also I can’t easily DIY creative colours, which is a shame. In fact, I’ve already ordered a creative gel kit and 2 extra grids so heyho, good upsell on magmod’s part! 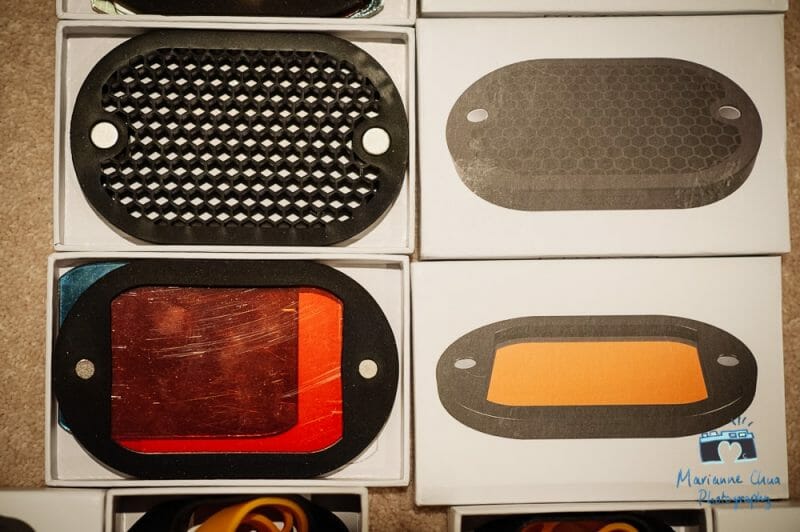 You get a nifty array of gels, 8 in total. No creative colours, mostly corrective gels and some neutral density, here’s the list whipped from MagMod: Full CTO, 1/2 CTO, 1/4 CTO, 1/2 Blue, 3X ND, 1/2 Straw, 1/2 Plusgreen. Fitting the gels is super easy, you literally just bend the rubber frame and pop it up, very pleased with it’s ease of changing. It’s probably worth mentioning that you can fit multiple gels into one frame, in case you want to triple-up the effect. 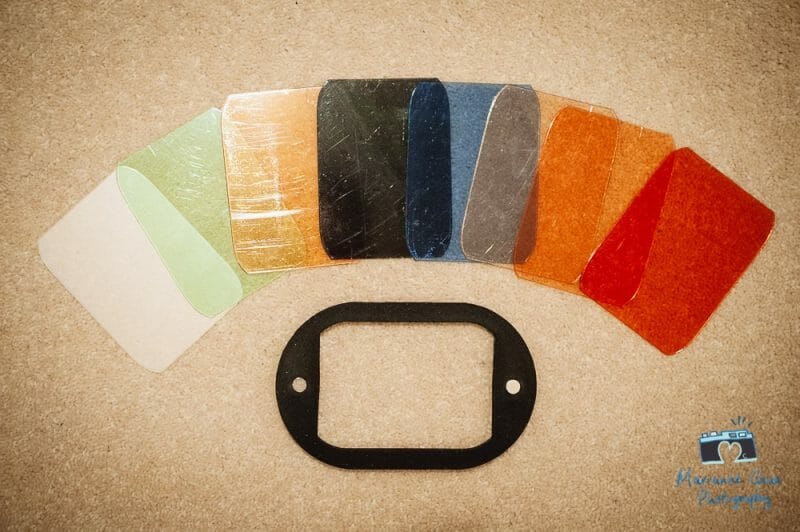 So here’s my main gripe… getting the maggrip onto the flash is HARD. Like I felt I was going to break my sb700, which isn’t even a big flash. If you have an sb910, good luck to you! There’s is a strategy they included in the following video: (http://www.youtube.com/watch?v=oPfmibW_8jM&feature=youtu.be) at around 30 second in. He makes it look well easy, but it still really was not that smooth for me. Think wrestling with a reflector but on a tinier scale. They say it gets easier with time once it stretches out a tad, I do think this is true as when I gave it a ‘warm up’ by doing a stretch armstrong action on it, it did seem to get easier. You literally have to peel/prod/push it on. 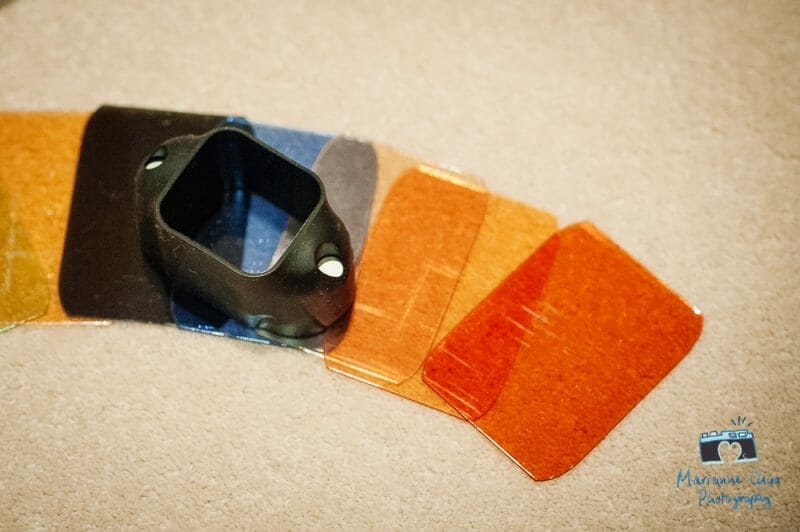 I’m not ashamed to say that I did the fridge test. Yes the magnet is strong and it can hold your flash to a fridge (lobster not included). 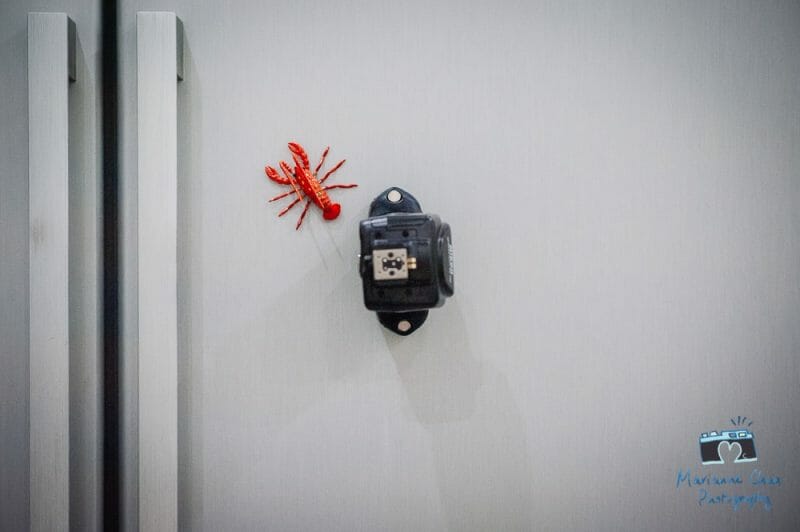 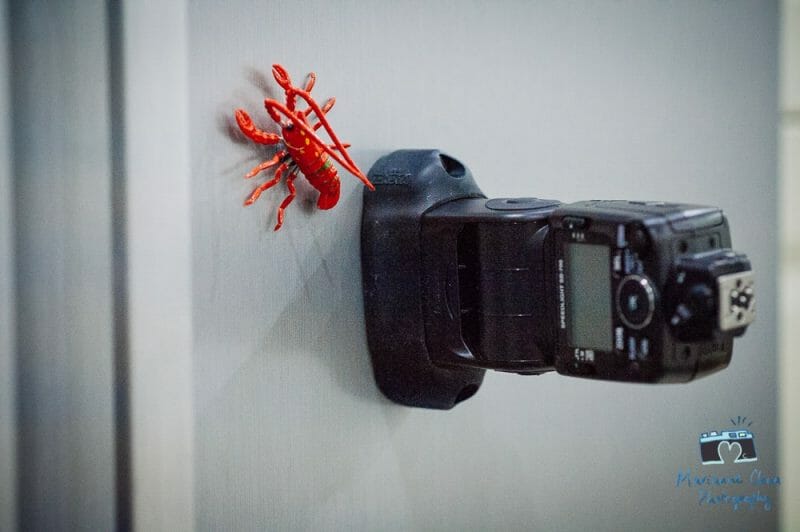 Here it is with the grid and gel attached, the actual grid/gel plates are a lot bigger than my sb700 here. I would say the MagMod is truly universal, I think it should cater up to pretty big speedlights. 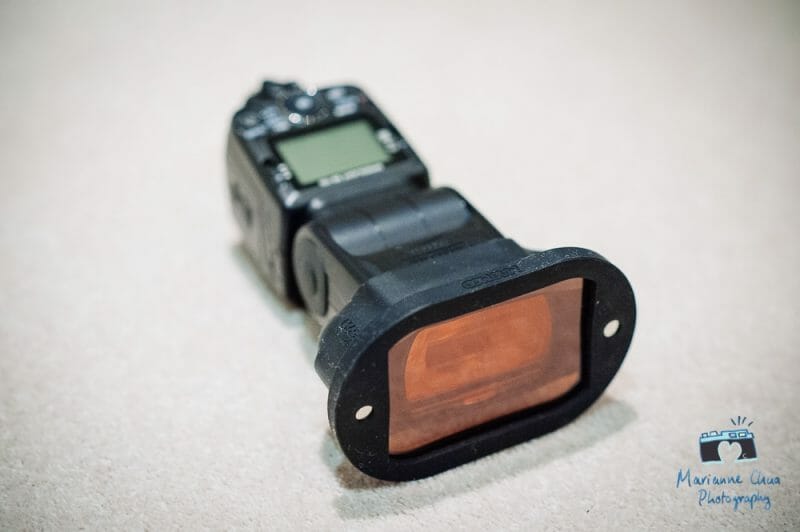 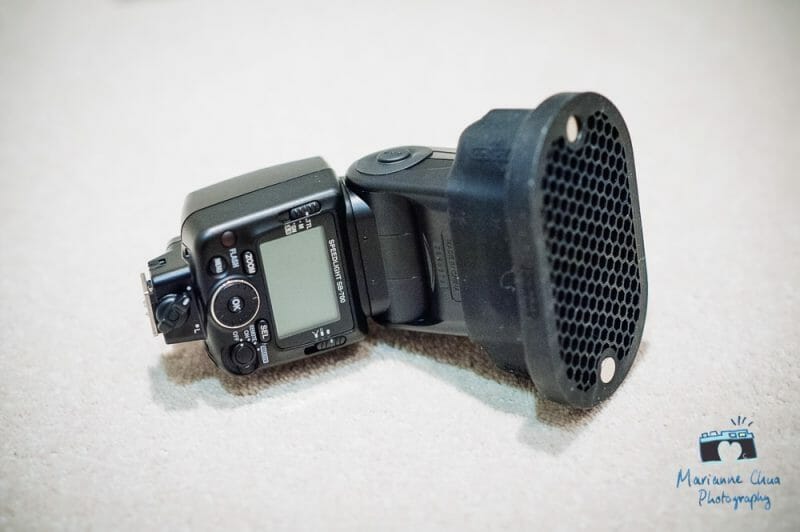 Right, I suspect what you really wanted to see was the grid test. For all of these shots, I’ve just set the iso/aperture/shutter to block out all ambient and set the flash to TTL pointing directly at the poor film cannister. They were shot with an 85mm 1.8. Here’s without any modifier (just noticed I need to hoover, damn). 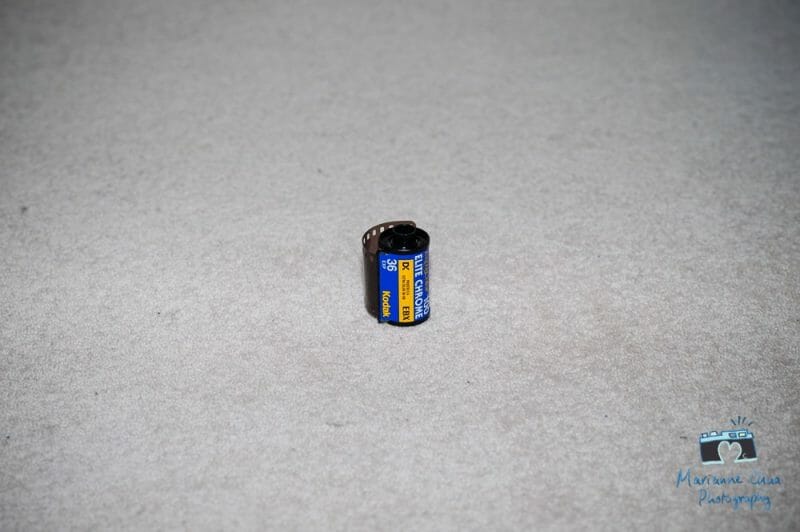 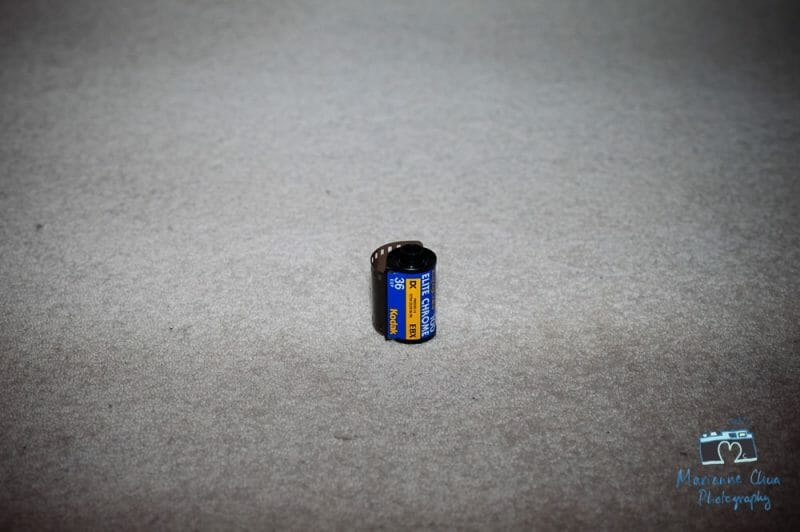 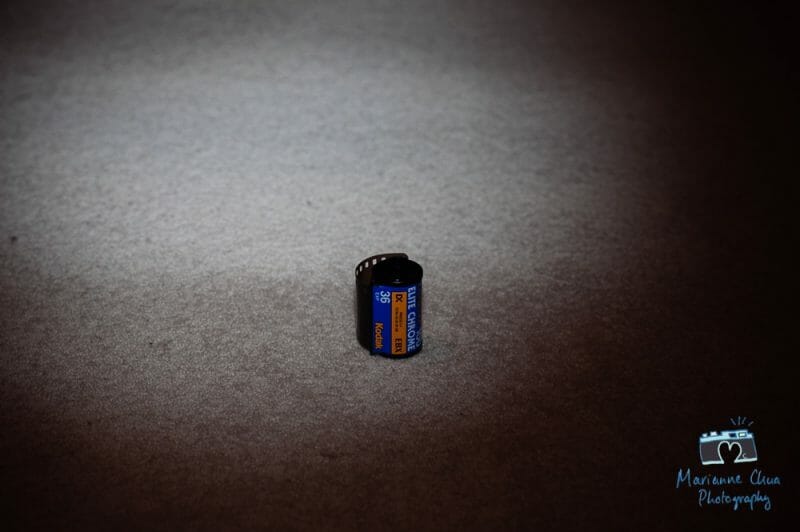 As you can see, the grid is REALLY effective, I actually ordered a third and fourth, so lord know how narrow that’s going to get. When I receive them I’ll post photos up for a 3 and 4 grid example. I’m really really chuffed at how well this works, it was a huge incentive for buying the magmod for me, it really is such a discreet, low key way of narrowing that light. I can’t wait to use it for couple shots where I want to just pick up a bit of the couple but keep the environment clean of flash. 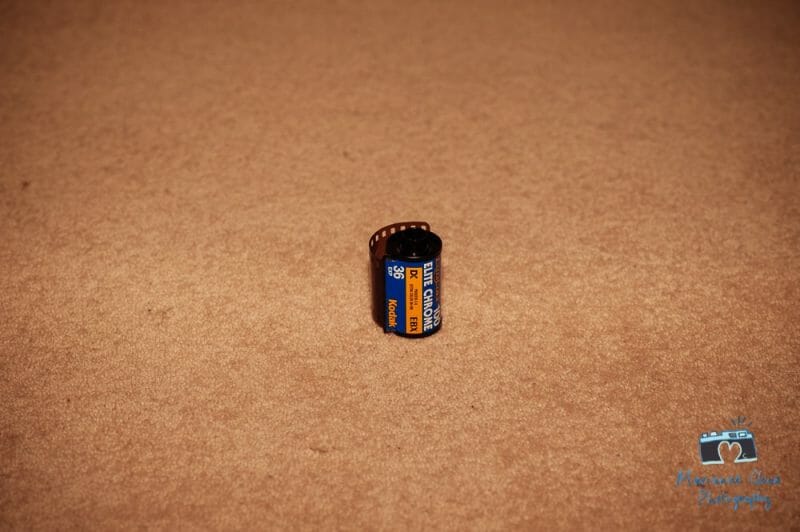 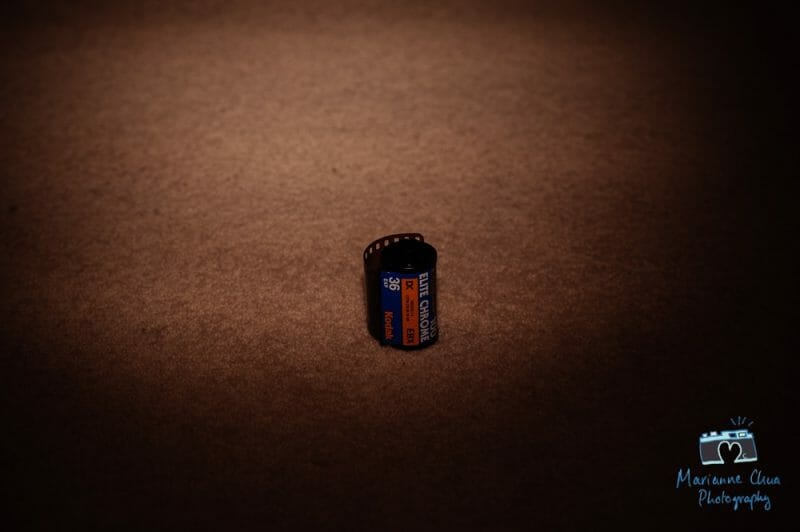 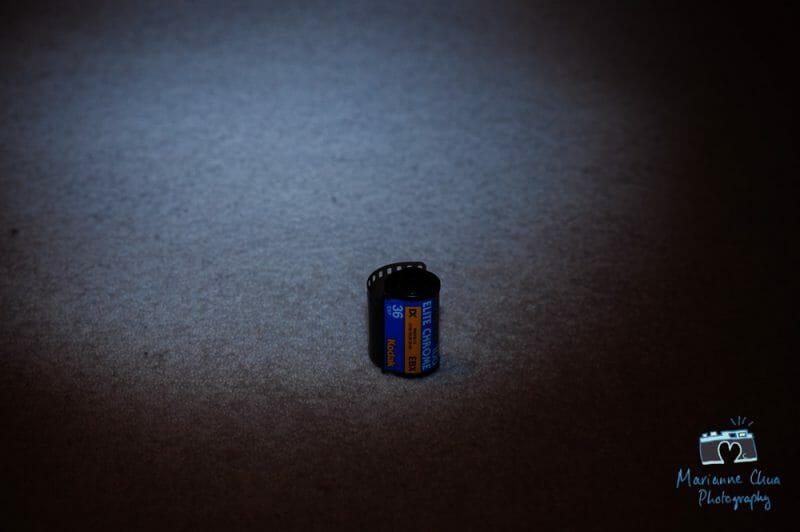 All in all, I’m very pleased with the MagMod, it’s well built, the gels and grids modify the light as they should, and it looks much more professional than faffing around with velcro! Really my only gripe is getting the grip on, but also I can see that it’s better it stays on than fall off all the time. And if what MagMod says is true, then that gripe should slowly disappear over time as the rubber stretches a bit. I paid $149 which is about £91 for the double kit and early delivery. Notably, I got caught out with customs and had to pay an extra £20, so be warned of that! For anyone looking to use gels or narrow their light, I would definitely say that MagMod are the way forward! You can order your own MagMod from here! 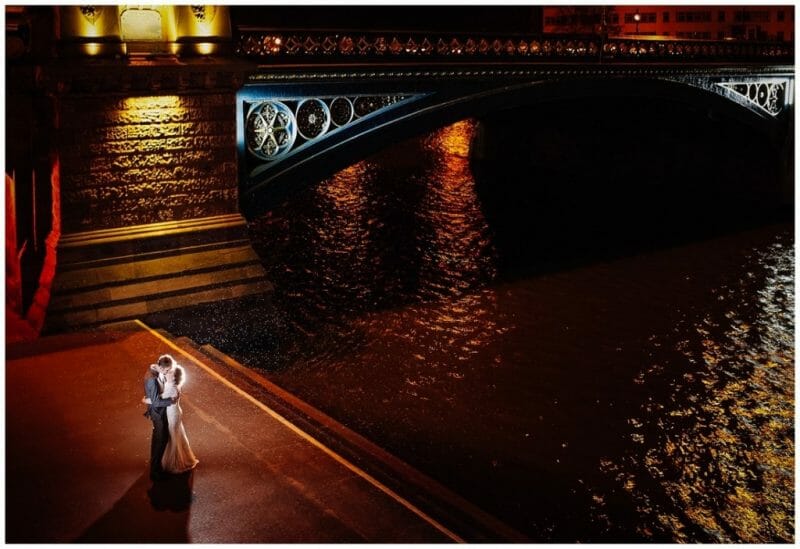