A comparison to the mini-speedlights for Fuji: Godox TT350 and Nissin i40 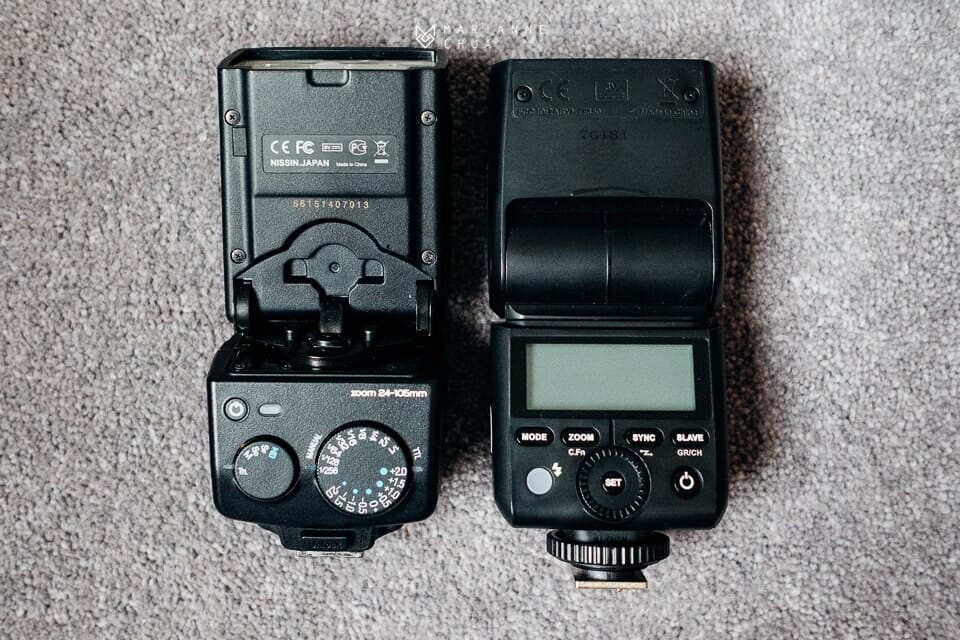 Shooting flash with Fuji has always been a sticking point for those looking to make the switch. There’s only one speedlight option from Fuji themselves, the EF-X500, and it’s quite a physically heavy unit. Coming late into the market with a price tag of £450 and no radio wireless technology (the master/slave works on optical tech), Fuji users are reasonably looking elsewhere for their flash needs. With the lightness of Fuji being a selling factor, the mini-speedlights are an appealing option as the average speedlight can feel a bit top-heavy when used on the hotshoe. Also, if you like to hand hold direct off camera flash, a mini speedlight is way more practical vs. a full sized speedlight. The two mini options I’ll review here are the Godox TT350 and Nissin i40. What do I re-heally mean by mini? Both of these units are 14cm in height and 6cm in width, compared to something like a Cactus RF60 where you’re looking at 21cm in height and 8.5cm in width. There’s no official cut off for a standard vs. mini speedlight, I just like to call them that! 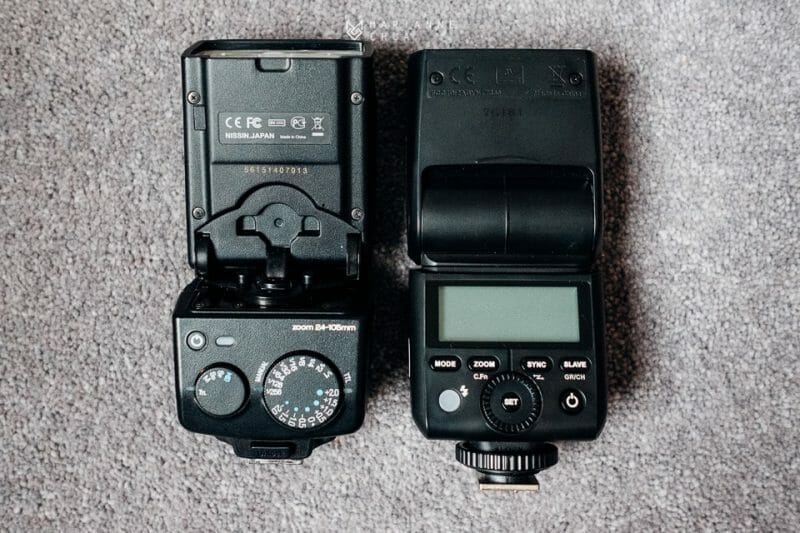 Here is a quick side-by-side comparison of the 3rd party mini flash offerings from Godox and Nissin. Nissin i40 has been out a lot longer than the Godox offering, which only became available for Fuji users in Summer ’17. 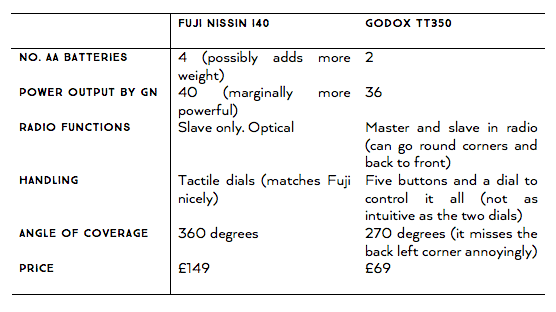 Weirdly, the i40 listing on Nissin’s website shows the left dial as having a wireless function with groups, but my unit and photos from other users in google images show it without the wireless function. Not sure what that’s all about- it might be the case that Nissin updated the i40 to work with the Nissin air controller system, but haven’t changed the name to distinguish between an older and newer edition so make sure you check that if you buy second hand off ebay. Even so, assuming you are buying a new unit with wireless functions, it’s worth noting that the i40 can only be used as a slave and uses optical technology which means, like the Fuji X500, you need a clear line of sight. The hugest plus point for the Godox TT350 is its ability to act as a radio slave AND as a radio master to ANY other Godox flashes. Also it’s worth noting that you can configure the 350 itself to NOT fire whilst still acting as a trigger. 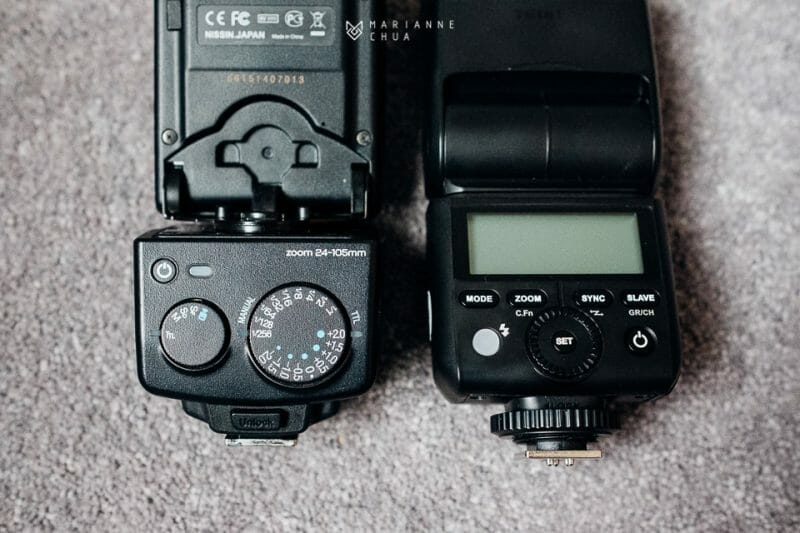 I find the recycling time of both not great compared to using a full size speedlight, but this is something to be expected, it can keep up with standard single shot shooting for reception candids, but there’s no way it’d keep up with crazy dancefloor action where you might need to fire off a few quick ones in a row. I find with the Godox TT350, every 1 in 4 shots will not fire, after I’ve been shooting a hectic dance floor for half a hour. The way I use the Godox TT350 is either as a trigger that won’t stress my hotshoe, or as a gentle fill flash in smaller venue spaces during a slower paced part of the wedding day. As soon as I need something quicker and more powerful, out comes my Godox 860II which is powered by lithium ion batteries (has a guide number of up to 190). The Nissin i40 was the first flash I ever bought for Fuji, (I’ve since sold it this unit I photographed was borrowed from a Fuji friend!), I remember finding it cold in TTL, and missing a lot of shots, as soon as I discovered the Nissin i60a I dropped all my i40 units.

Moving to the more hardware based side of things: One thing that seems unimportant but it kind of niggles me- the near flatness of the TT350 means it fits into your bag alongside other units nicely, whereas the i40 straightened out exposes some of the wiring and is a bit of an awkward shape to pack. I do love the dials of the i40 both for the ease of use and aesthetic- the menu of the TT350 takes a little while to get used to and I’ve had to walk my FU flash workshop students through it step by step. If you aren’t a manual explorer, you’re probably going to take a while to find absolutely everything on the TT350. Lastly, the angle of rotation on the TT350 weirdly isn’t 360 degrees- it fails to shoot over your left shoulder because I guess they assume people’s right hand will go topside when shooting portrait, so it doesn’t really hinder you unless you’re trying to very specifically bounce from a wall on the left side (and yes this limitation has caught me out a few times which was frustrating!) 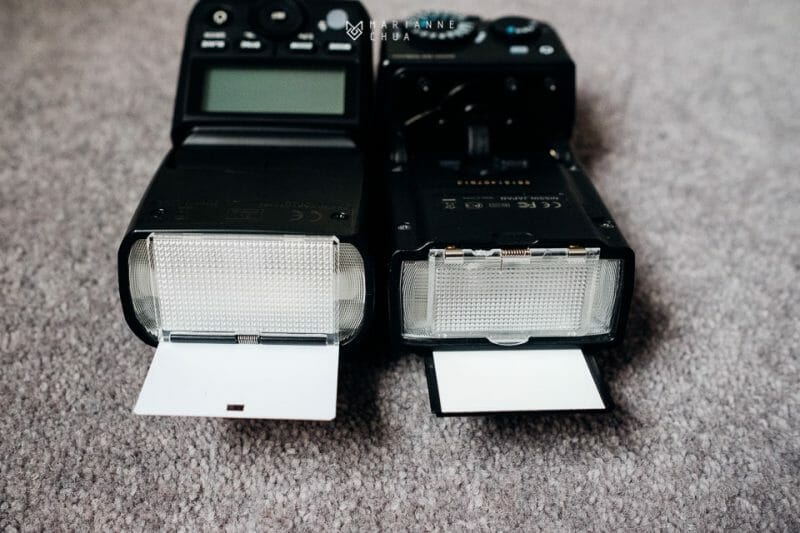 All in all the only advantages the i40 has over the TT350 is a tiny bit more power (which I doubt you’d clock in the shot), a more intuitive menu and its 360 degree rotation. I’m sorry (for Nissin) to say that the Godox TT350 totally trumps it on all other fronts, it’s lighter with batteries in, its radio functions are way more advanced at literally less than half the price. And with full radio compatibility with a bigger range of Godox flashes including the pocket speedlight/barebulb AD200, it’s a no brainer to go for Godox, you can buy it directly below!